she said, with tears streaming down her cheeks, when a Japanese journalist suggested they go back and visit her old home together. Away for so long from her hometown in South Chungcheong Province – a place which she could now only dream about.

‘There are American military bases there too.’

After her family members dispersed when she was six, she worked as a maid and got married and remarried. She then left home and her idle jobless husband. And at the age of 29 living in Heungnam in the Hamgyung province in the northern part of Korea, she was hoodwinked by a female agent who said, ‘You just have to lie back and open wide and bananas will fall into your mouth’. She was taken to Dokashiki, an Island in the Okinawa chain, in 1944, given the Japanese name Akiko, and coerced into sexual slavery for Japanese military together with six other Korean women. When the US began air-strikes and a naval artillery barrage, she went into hiding, suffering hunger and terror, and just managed to survive the air-raids.

After the Japanese surrender in August 1945, she was arrested by the American military and imprisoned. But she managed to escape and then drifted around Okinawa. She spoke no Japanese, knew no-one with any money, and ended up ‘servicing’ drunken men, selling vegetables, collecting empty bottles and the like. Nowhere finding solace, she tramped barefoot around the whole of Okinawa holding her Japanese military work shoes in her hands.

Kim Hyun-ok (金賢玉) and Kim Soo-sup (金洙燮), an activist couple who formerly worked at the Okinawa Prefecture headquarters of the General Association of Korean Residents in Japan (Chongryon), met Grandmother Bae Bong-gi in 1975. At the time, Grandmother Bae Bong-gi often said, "I'm upset that the friendly troops (the Japanese Army) lost the war." To live alone before and after the war was also "much more painful" for her than the war itself. She said that her 'fate' led her to be separated from her family when she was just a child, to become a 'comfort woman', and to lead a lonely life in a foreign country. The Kims explained to Grandmother Bae Bong-gi that her experience was not because of her fate, but because of Japan, which colonized Korea and exploited countless Korean women for 'Japanese military sexual slavery' (called ‘comfort women’). However, she did not believe those words, as she had been constantly deceived by both Japanese and Korean people..

She had forgotten the Korean language or the taste of Korean food, and lived in a shed gently laid out in the middle of a sugar cane field, as the aftereffects of war compelled her to avoid other people as much as possible. When people discovered that she was a 'comfort woman' in the past, children in the neighborhood threw stones at her. She then wandered around Naha (那覇), yelling, "I'm Korean." She shouted loudly inside her room, beating pots with kitchen knives, and was even overwhelmed with an impulse to stab her own neck with scissors while she was using them to cut and attach a plaster to suppress her headache.

In April 1977, Grandmother Bae Bong-gi confessed her damage in detail for the first time in [The Choson Sinbo (朝鮮新報)], the bulletin of the Chongryon, after deciding to accept coverage of her story. "It was hell, the hell of the world," she said, as she mentioned her memories of Korean military workers performing forced labor in the Battle of Okinawa. 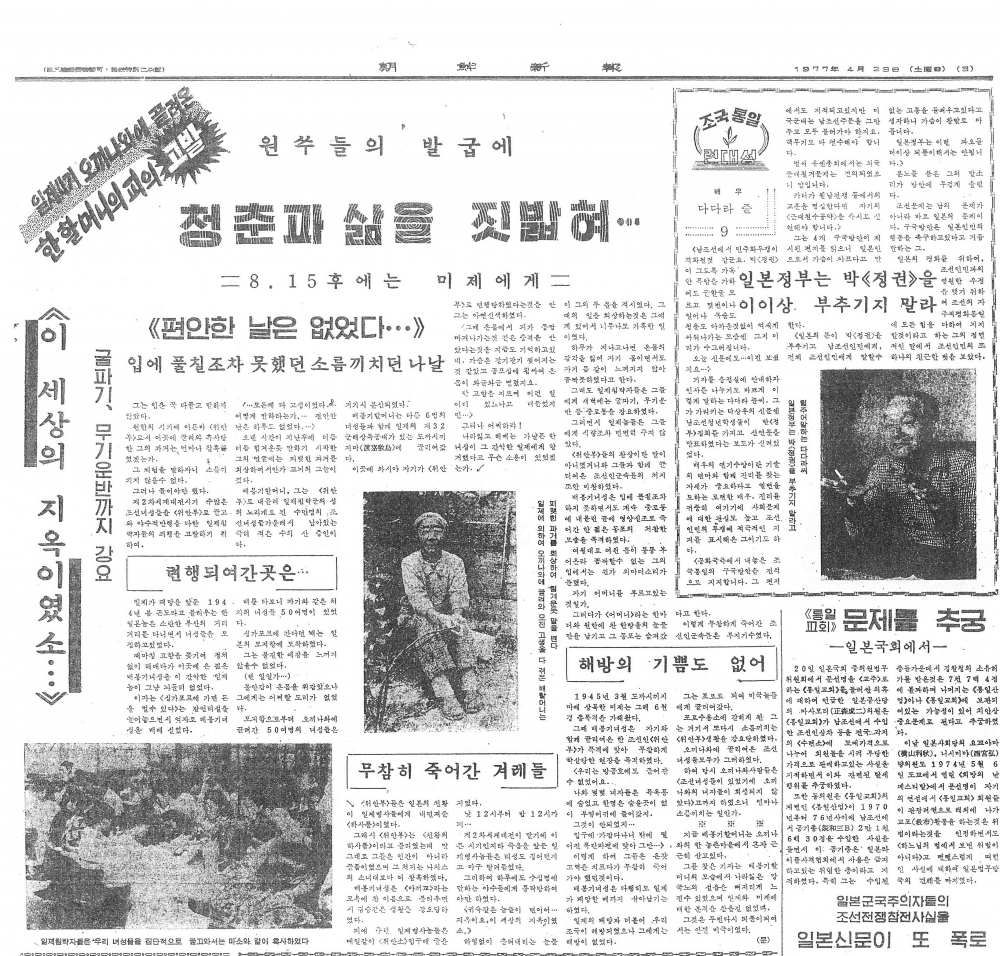 In the next decade or so, Grandmother Bae Bong-gi and the Kims maintained their close connection which could be likened to that of a parent-child relationship. They met every month to eat Korean cuisine or bulgogi together, and Grandmother Bae Bong-gi soon expressed, "It’s right for a Korean person to eat Korean food." As she interacted with other Okinawans along with the Kims, she slowly began to learn about the Korean War, the U.S. warplanes' attacks in Okinawa during the war, and the fact that some Okinawans were opposed to South Korea-U.S. military drills or to the division in the Korean Peninsula, as they recognized the crimes involved in those affairs.

And, when a Japanese reporter who had known Grandmother Bae Bong-gi suggested going to her hometown together for the 1988 Olympics in Seoul, Grandmother Bae Bong-gi burst into tears while pointing to her hometown on the map of the Korean Peninsula. She told the reporter that there is a huge U.S. army base in Okinawa, the place she had lived longer in than her own hometown where she was born. The U.S. army base is also in Korea, and the Korean people are divided into the North and South, so she would not be able to do much even if she went back. She said that she might go back only after Korea becomes reunited and the foreign army withdraws. When Kim Soo-sup told her, "Korea will reunite. We will come back together after reunification," Grandmother Bae Bong-gi nodded and finally stopped crying. 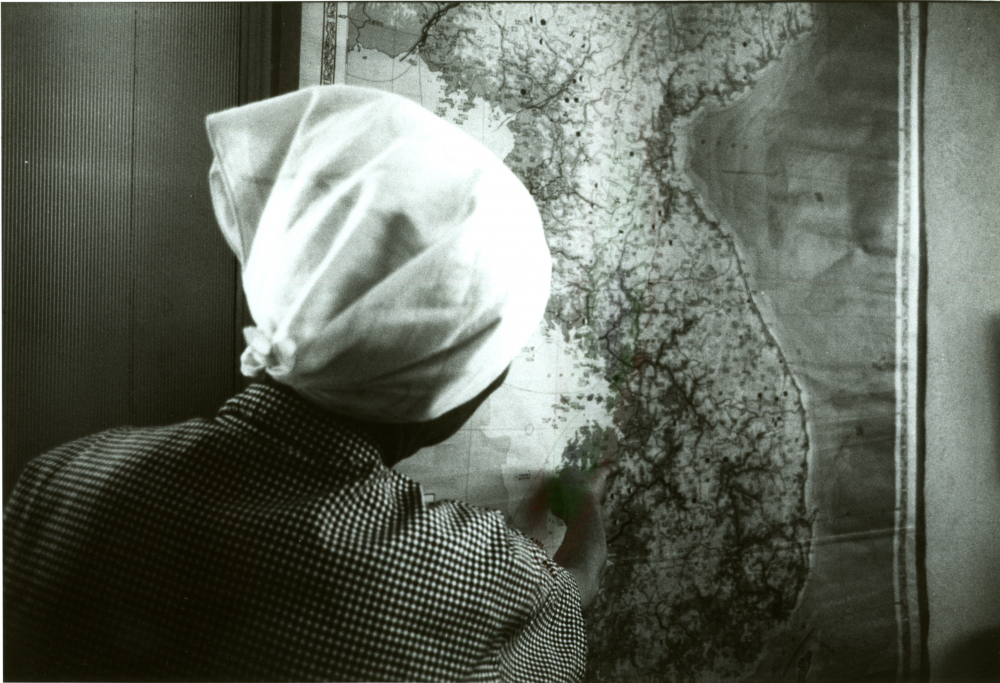 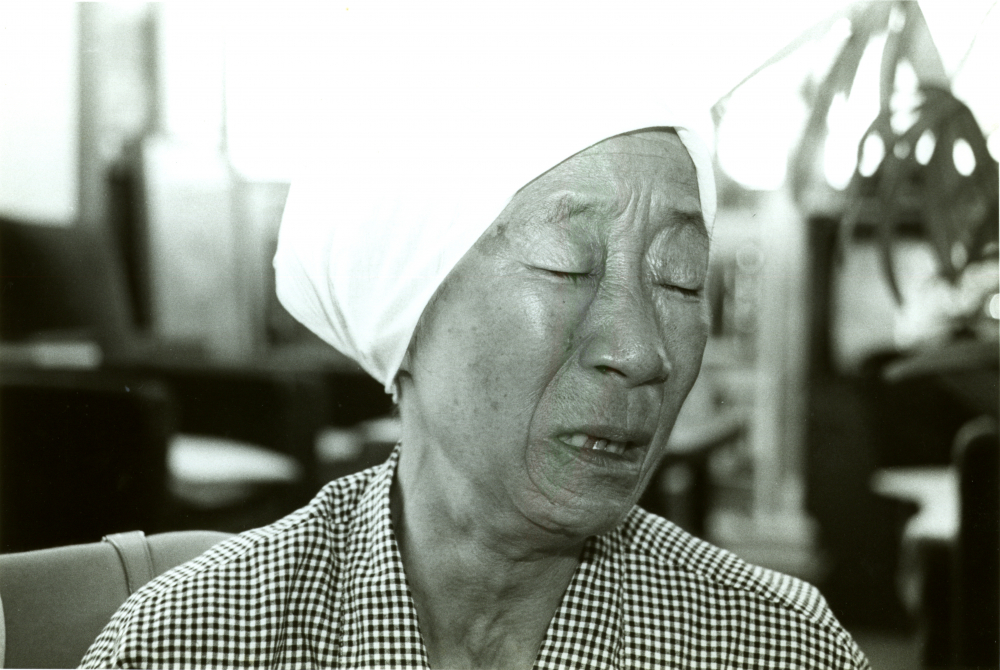 Grandmother Bae Bong-gi cried as she said, "I'm so thrilled." while watching Lim Soo-kyung on the TV arriving at an airfield in Pyongyang to participate in the World Festival of Youth and Students in 1989. When she heard the news of Emperor Shōwa (昭和) Hirohito's death, she raised her voice as she mentioned she wanted Hirohito to "apologize" and began to repeatedly say "Please take revenge." in Korean. She was most pleased when relations between North Korea and Japan improved in 1990. She also habitually said to the Kims, "Let's go back together, all three of us, when Korea becomes reunited." She passed away quietly at her home in October 1991, 49 days before Grandmother Kim Hak-sun filed a lawsuit against the Japanese government. 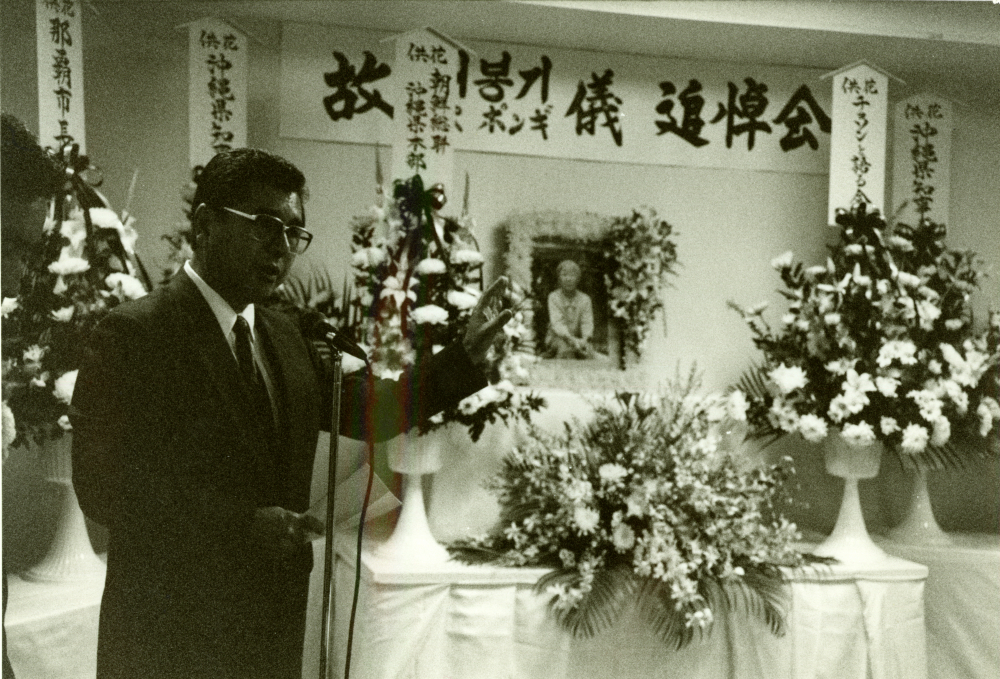 The '4.23 Action' in remembrance of Grandmother Bae Bong-gi'

It was 2012 when I heard the above stories through Kim Hyun-ok. Although I already knew about Grandmother Bae Bong-gi through her testimony and related books, it was the first time for me to hear the stories not merely as the accounts of a 'victim' but as the personal anecdotes of someone who felt so real to me that I could almost hear her breathing. It was also the first time for me to discover that those who had closely interacted with Grandmother Bae Bong-gi with all their hearts were the former activists of the Chongryon such as Kim Hyun-ok. Kim Hyun-ok even told me at the time the following:

"It seemed that Grandmother Bae Bong-gi had accurately understood and entirely accepted in her later years that it was not her fate but Japan's colonial policy that led to the colonization of Korea and the division of Korea into North and South, and that these were what happened to people who lost their country. Grandmother Bae Bong-gi regained her human rights by herself through her own experiences and knowledge, not through what I said. I think that’s the most important thing." 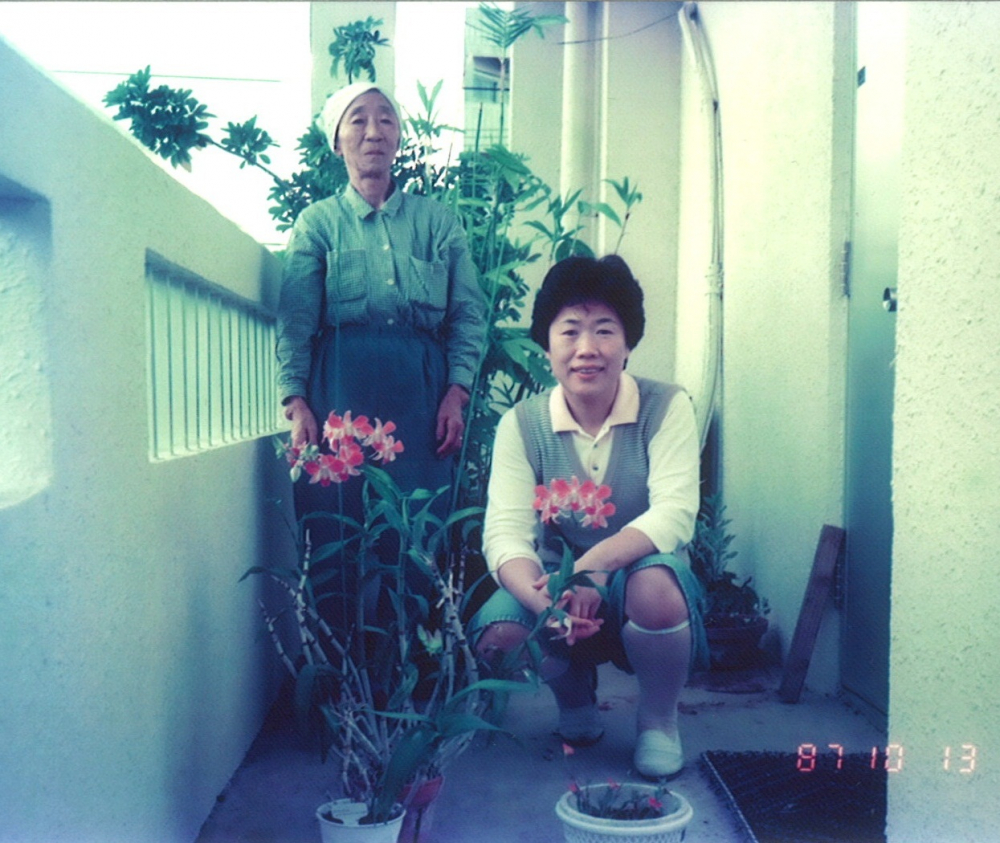 I found myself sobbing by the time I finished the interview. The violence of Japanese imperialism turned Grandmother Bae Bong-gi into a 'subject of the Japanese empire' to the point of her saying, "I'm upset that the friendly troops lost the war." The Cold War in East Asia and the division of the Korean Peninsula made her cry and say, "The time after war was much more painful for me than the war itself.", or "I want to go, but I can't." when she thought of her hometown. The perpetual presence of the U.S. army base was a reminder of structural discrimination and violence against Okinawa. However, despite such structural violence, meeting and interacting with the Kims helped Grandmother Bae Bong-gi to objectively recognize the damage that had been inflicted on her, to accuse the world for the first time, and to desire so much for an apology from Hirohito and the reunification of the Korean Peninsula to the point of her saying “I hope they apologize,” and "Let's go back together when Korea becomes reunited." The Kims lived together with Grandmother Bae Bong-gi sharing deep love as compatriots. I was overcome with shame for having lived without knowing all of this myself.

Afterwards, I published a long interview article that reflected almost everything I had heard from Kim Hyun-ok, in [The Human Rights and Life (人権と生活)] which is the bulletin of the 'Human Rights Association for Korean Residents in Japan (HURAK)' that I formerly belonged to as an activist. However, I felt that was insufficient in fulfilling my duty as someone who indirectly listened to the story about half a lifetime of Grandmother Bae Bong-gi. I especially felt a strong sense of crisis as I realized that unless more people, specifically Koreans in Japan (the Zainichi Koreans) such as Grandmother Bae Bong-gi herself, learned about and remembered her life to keep her wishes alive, her existence might become buried in darkness once again. This also coincided with the establishment of the second Abe cabinet that denied Japan's state responsibility for the Japanese military sexual slavery and the explosive remarks made by Japanese politicians that crushed the dignity of the survivors.

The '4.23 Action' was organized by HURAK's 'Sub-committee for the Eradication of Sexual Discrimination’, which has been regularly hosting study meetings on discrimination or violence based on gender or ethnic groups, including the Japanese military sexual slavery issue. Although the action was organized in haste, many Korean students in Japan in their teens and 20s took up the majority of about 80 participants in total. Messages of solidarity arrived from the Kims and the Korean Council for the Women Drafted for Military Sexual Slavery by Japan (at the time). Itokazu Keiko (糸数慶子), a lawmaker who had interacted with Grandmother Bae Bong-gi in the land of Okinawa, also took part to deliver remarks. All participants shouted in Korean and Japanese the slogans, "The Japanese government should apologize to the grandmothers!" "Never forgive the denial of the Japanese military sexual slavery!" "Let’s preserve the dignity of Korean people!" "We stand against the denial of history!" "Official apology! Legal compensation!", and so on.

Thanks to this report on the '4.23 Action', [The Hankyoreh] published a special article titled «Bae Bong-gi: First Witness of the Comfort Women, Forgotten by Koreans» on August 8, 2015 featuring a picture of Grandmother Bae Bong-gi on its front page. 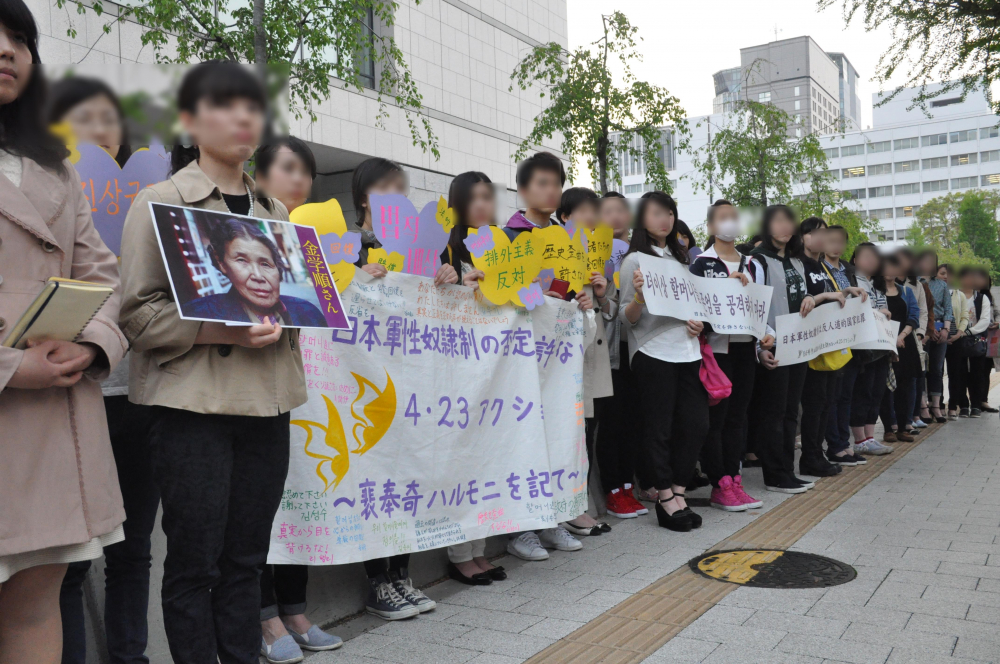 Beyond the division of the Korean Peninsula

Ever since then, the Sub-committee for the Eradication of Sexual Discrimination has been organizing annual events in commemoration of April 23 to remember not only Grandmother Bae Bong-gi but all those who were victimized by the Japanese military sexual slavery and to resolve the issue of Japanese military sexual slavery. In 2016, it hosted a screening of the movie «Living with 'Memories' (“記憶”と生きる)» in which the director Doi Toshikuni (土井敏邦) documented the daily lives of the survivors staying in the 'House of Sharing'. In 2017, it organized a symposium titled «The Problem of 'Japanese Military Sexual Slavery' and the Division of the Korean Peninsula: Staring at the Victims who are Becoming Invisible (日本軍『慰安婦』問題と朝鮮半島の分断～不可視化される被害者を見つめて)» focusing on the recognition of the problems regarding the 2015 Korea-Japan 'Agreement', the victims in the Democratic People’s Republic of Korea (DPRK), and specifically Grandmother Bae Bong-gi. I, along with Li Haeng-ri (李杏理) and Kim Mi-hye (金美恵), participated as presenters for the symposium.

In 2018, a multi-faceted event took place for two days. Titled, «Confronting Japanese Military Sexual Slavery Now: The Victims' Voices X Art», the event featured a student art exhibition from a Korean school in Japan with the theme of the Japanese military sexual slavery issue, a Talk by Yang Ching Ja (梁澄子), Mini Live of Gisaeng and Kim Sung-soo (金成樹), and a play «Caramel (キャラメル)» by Kim Ki-kang and Hong Mi-ok (洪美玉). More than 400 Koreans in Japan, along with Japanese citizens, and participants from Korea joined the event.

By inheriting the wishes that Grandmother Bae Bong-gi never got to see fulfilled, we will continue to do our utmost in resolving the problems of the Japanese military sexual slavery and in achieving the peaceful unification of the Korean Peninsula.